The Blue Merle French bulldog is an exceptional breed. With their aesthetic beauty and loving personality, they are a popular breed that became widely known for their bright blue eyes and unique appearance.

If you are a prospective buyer of the Blue Merle French bulldog, there is a lot that you should know about this special pooch.

Read ahead to acquaint yourself with this furry buddy a little better!

About The Merle Blue French Bulldog

Often referred to as the ‘Blue gene breed’ of French Bulldogs, a Blue Merle French bulldog is a Frenchie with a unique appearance.

This color pattern was recently introduced in the breed and has become widely known.

The Merle gene is responsible for making different types of modifications in the French bulldog’s body. These modifications generally occur in the dog’s coat, nose, eyes, and paw pads.

When the changes occur in the dog’s iris, the result is bright aqua-blue eyes. Merle Blue French bulldogs are the only Frenchies whose eye color stays blue.

You must know that the blue iris color is the diluted version of the black color. Merle Blue Frenchies are the only one of their kind.

Do Blue Merle French Bulldogs Suffer From Any Issues? 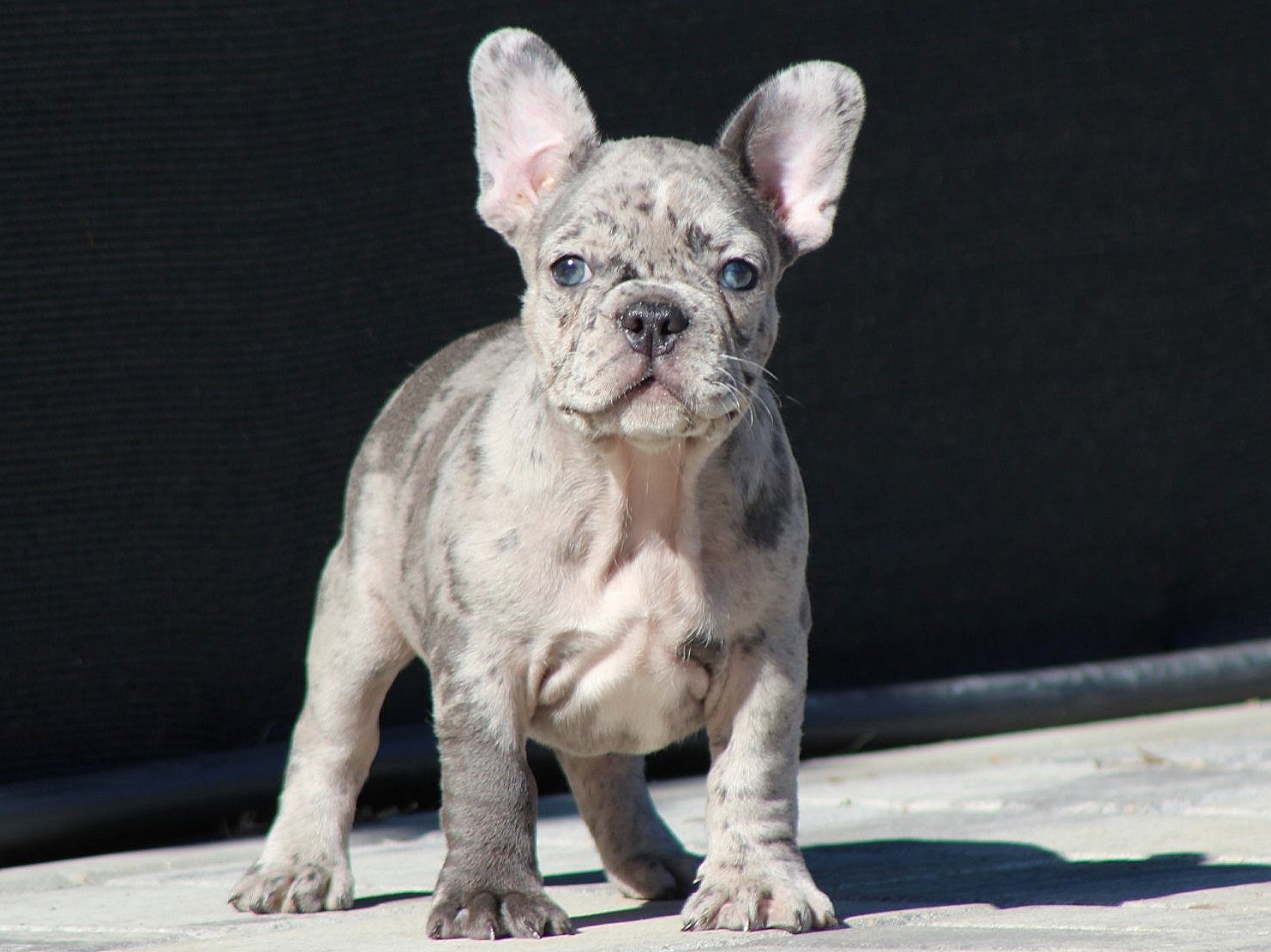 The internet is filled with misconceptions claiming that Merle Blue French bulldogs are more prone to health issues and genetically inferior to French bulldogs.

However, these genes do not cause the Blue Merle French bulldogs to face any issues. It depends on the way they are bred. When they are bred responsibly, your Merle Blue Frenchie can be as healthy as they come.

However, the issues occur when the process of breeding is done irresponsibly. Breeders often breed one Merle with another Merle, which results in a double Merle gene. If a pair of Merle Frenchies are bred, the result can be a breed called “double Merle.”

When a pair of French bulldogs breed together, there is a chance that the offspring will be a homozygous Merle. The probability of that happening is 25%. That is the main reason that breeding Merle dogs are discouraged.

Because of the double Merle genes, the dog can face vision problems such as:

Your dog could develop extension allergies, alopecia, skin inflammations, and staph infections that could even lead to their death.

A homozygous Merle can also face loss of hearing since birth, or they can develop that later.

The dog could also face neurological defects and immunity disorders due to the irresponsibility of the breeder.

How To Ensure That Your Merle French Bulldog Is Safe?

Before buying a Blue Merle French bulldog, you need to ensure that the breeder meets particular criteria.

DNA plays an important role in this aspect. You might want to ensure that the DNA test is available from a canine department with DNA profiling. This ensures that the Merle French bulldog you purchase is authentic.

Make sure that all the preventive measures and immunizations have been provided to the dog. This should include treatment for worms, fleas, and ticks. It should all be given to you in writing, along with the vaccination history by the breeder.

Once you get your dog, take them to the vet and get a full body examination.

Do not forget to ask the breeder for proof that they have filed all the necessary paperwork with the American Kennel Club.

Will A Merle Blue French Bulldog Be Considered A Crossbreed? 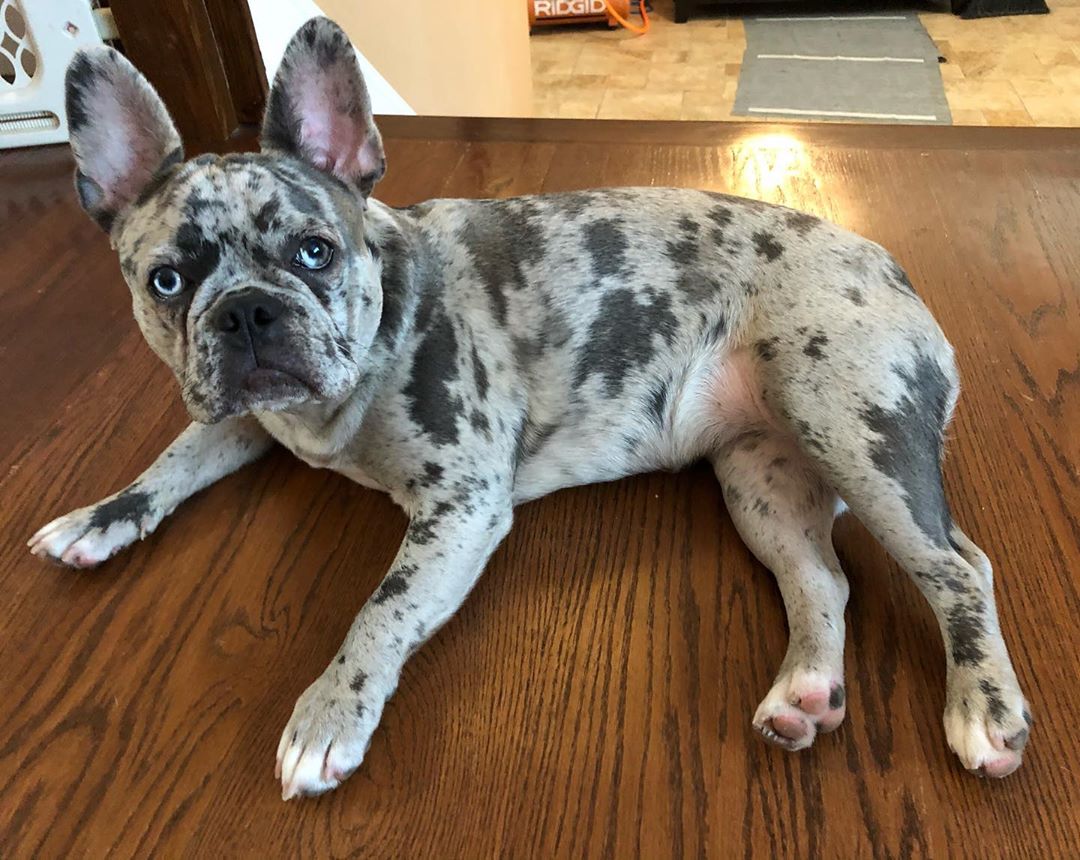 Selective breeding is a process in which breeders choose animals of different breeds with specific characteristics in mind and breed them to produce different offspring. The offspring will have the desirable characteristics of both parents.

If a pair of Merle dogs breed together to form a litter of offspring, the result will include 50% Merle, 25% non-Merle, and the remaining 25% will be double Merle.

Due to the low melanin levels, some offspring will have bright blue eyes. The chance of developing blue eyes can increase when a high amount of amino acids is not present in the body. Blue Merle French bulldogs are quite incredible creatures. With their adorable faces, compassionate personality, and family-friendly nature, they’re certainly a favorite among pet owners or enthusiasts.

Due to their popularity over the last ten years, French bulldogs come in the top four most popular breeds of dogs.

A standard French bulldog can cost you around 2000 bucks, but a Merle Blue French bulldog is going to be even more expensive. These dogs can range from $6000 to several more of those dollar bills.

A full-grown Blue Merle French bulldog is generally a more affordable option than these highly-priced puppies.

Apart from the purchase price, Merle French bulldogs require extensive care, which is not cheap. They have a big appetite, and they need to be taken to the vet more often.

Things You Should Know Before Buying Blue Merle French Bulldog 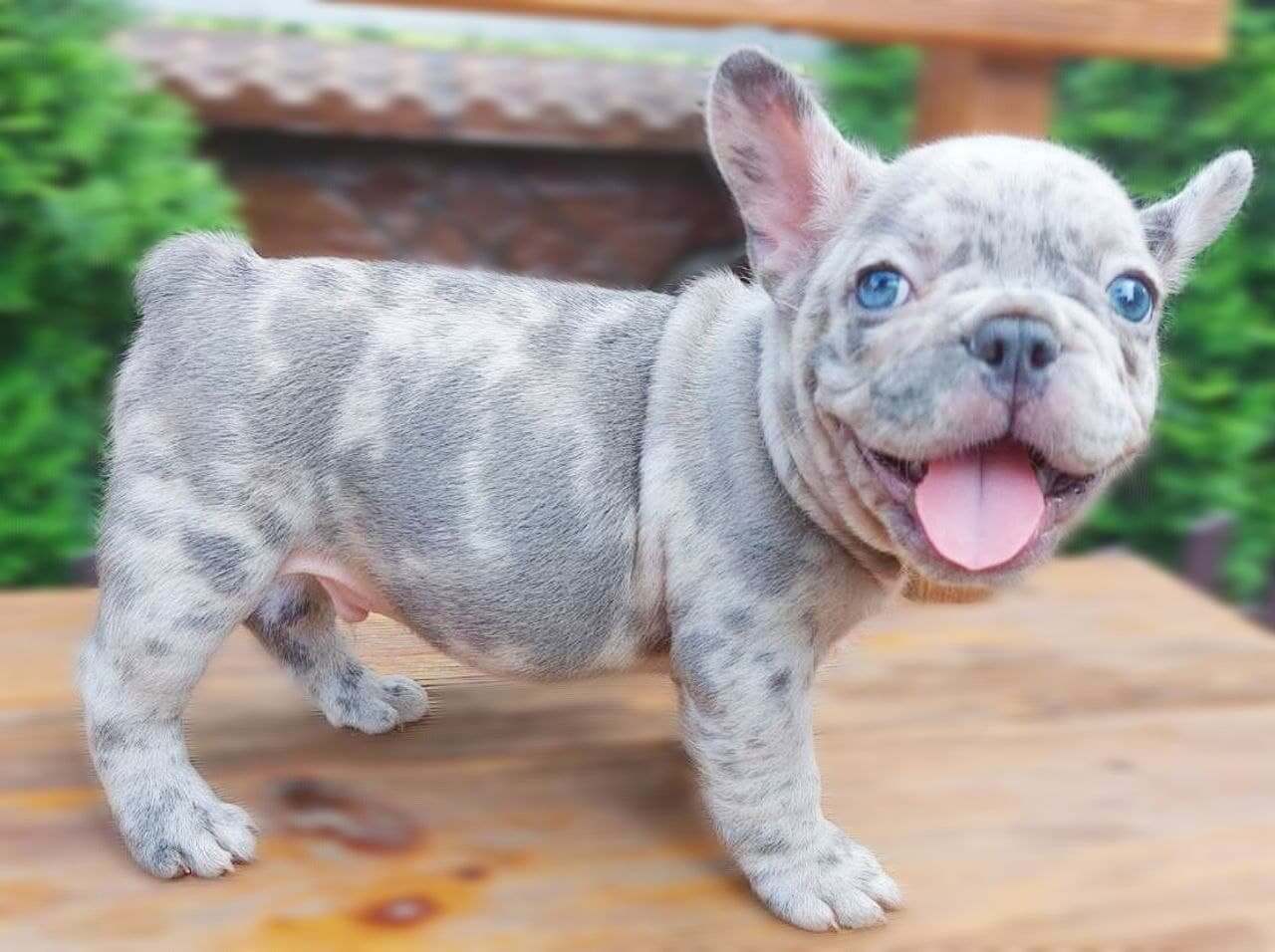 Merle French bulldogs make excellent pets with their laid-back nature and compassionate personality. They are a breed of family dogs that get along well with everyone, be it elders, children, or even other pets. They adapt well to small spaces as well as larger ones.

But there are some things that you should know before you purchase these dogs.

French bulldogs are generally expensive. The price tag is hefty, but it does not end there. There will be additional costs when you buy a rare breed like Blue Merle French Bulldog.

You will also have to consider the costs for food, leashes, collars, grooming products, and daily veterinarian visits. Since these are small dogs, their needs will be more than those of larger dogs.

The gene that creates the Merle breed of French bulldogs is responsible for causing many risks, such as hearing impairments, loss of sight, and blue eye defects.

When two Merle breeds are bred, a double Merle French bulldog is produced. These double Merles have an 86% risk of deformation, skin conditions such as alopecia, and other neurological defects.

Before you buy a Blue Merle French bulldog, consider these factors.

Where To Find Them

You need to purchase these dogs from a responsible breeder. The breeders must breed a Merle dog with a purebred French bulldog to minimize the risk of any health issues.

The most important thing is to do thorough research and find a reputed Merle French bulldog breeder. Ensure that the dogs have completed their health check and the breeder has filed the necessary paperwork.

How To Care For Your Blue Merle French Bulldog? 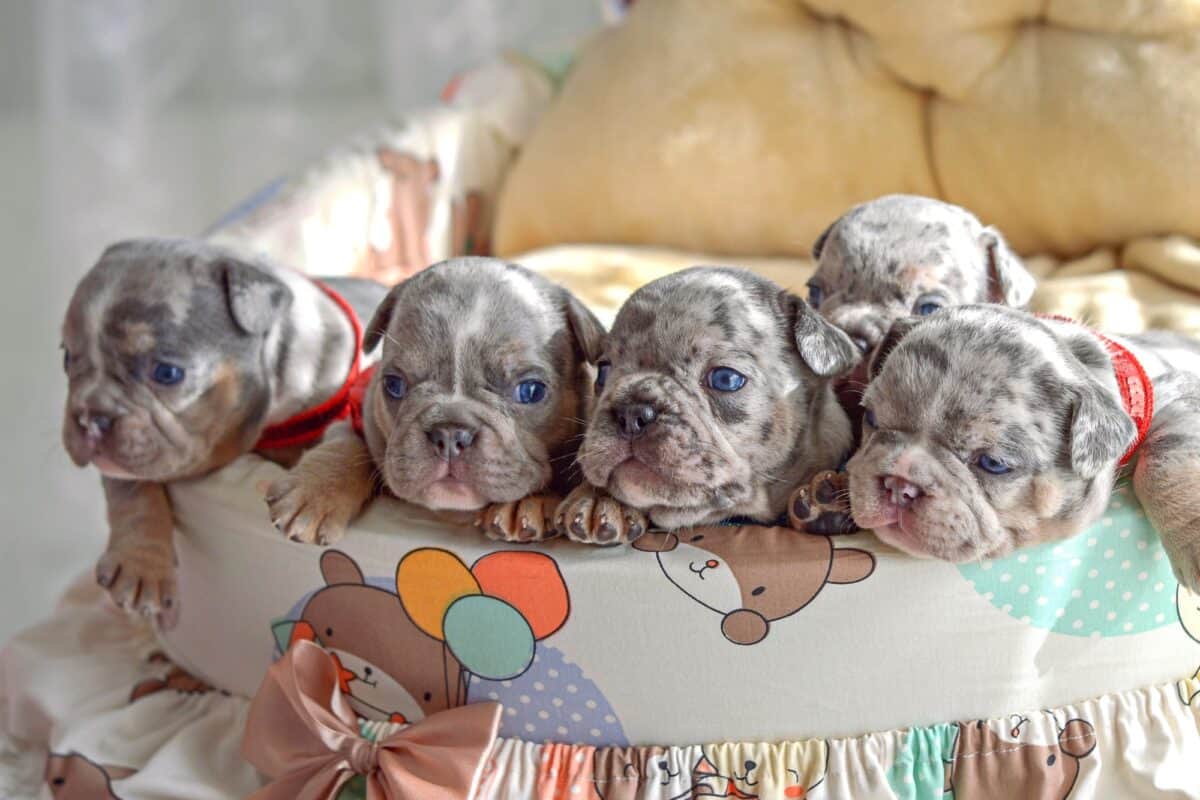 You must keep your pet’s ears and skin folds clean to minimize any chance of an infection. Merle French bulldogs do not shed much, but if you brush their hair regularly, you can minimize the shedding.

Ensure that your pet doesn’t spend too much time outdoors and takes regular baths.

Blue Merle French bulldogs are very compatible with people who do not get regular exercise. These dogs do not require too much exercise, and they can adjust well to any surroundings.

Merle French bulldogs are very stubborn in nature. Therefore, you must put them into early training. While training them, you should be very patient.

They love getting rewards and treats. So, ensure to pamper them with treats after a good training session.

It is recommended that the Merle French bulldogs are fed a completely raw diet known as the BARF diet. It will help to avoid the risk of developing allergies and keep your furry baby active.

Is It Ethical To Buy Blue Merle French Bulldogs?

Although we know crossbreeding leads to a number of issues in a Blue Merle French bulldog, it generally depends on the way it has been bred. You should do your research and choose a breeder who is legal and breeds the animals per the standards of AKC.

Many responsible and trustworthy breeders are putting sincere efforts into producing healthy Merle offspring. If you think you can take care of a high-maintenance dog, you can go for it.

It is well known that Blue Merle French bulldogs are a popular breed. They can be your companion who can cheer you up any time of the day. But there are a lot of pros and cons to consider as a potential dog owner.

It takes a lot to care for a special dog like this one. Therefore, ensure that you will be able to provide what your dog needs.

Are French Bulldogs Good with Kids? Overweight French Bulldog – Is Your Frenchie Too Fat? 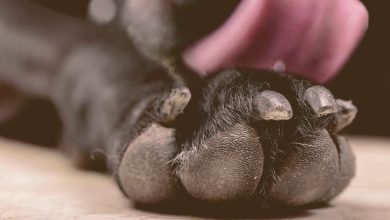 French Bulldog Licking Paws – How to Stop It? 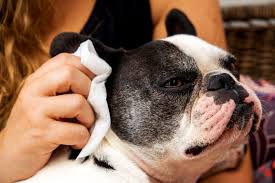 How To Clean French Bulldog Ears: The Guide